Tuna stuffed mini peppers are healthy, colourful and full of sweet flavour. They are perfect to serve as finger food at dinner parties, as a lunch snack, or as a starter for a family meal.

Stuffed peppers are so easy and simple to make. The typical stuffing for bell peppers used to be ground beef and rice, but in fact there are so many possible ingredients to use with stuffed bell peppers, the options are almost endless. While the normal size bell peppers are usually used for stuffing or even jalapeño peppers as a smaller and spicy version, these mini peppers are such a great alternative. Due to their size, they are the perfect bite sized finger food.

If you are looking for healthy, stuffed mini peppers, using canned tuna is a great option. In combination with some Mediterranean flavours like olives and zucchini, this recipe makes a nice and light dish filled with great flavours that you can most likely find right in your own pantry.

What ingredients to use for stuffed peppers

Stuffed peppers can come with many combinations of ingredients. The main ingredient for this stuffed pepper recipe is canned tuna, something that most people will have in their pantry. So if you get a surprise visit, this recipe is whipped up in 30 minutes and you have something great to serve to your guests.

I like to serve the stuffed mini peppers open, which makes it easier to add the filling and nicer to present. So first cut the peppers lengthwise in half and remove the white membrane and the seeds. Mini peppers tend to have much less seeds than normal bell peppers. I leave the green stem, because it keeps the peppers more firm to eat as finger food after they have been roasted.

Finely chop the red onion, zucchini (with peel) and the olives. Drain the canned tuna. If you are using tuna in olive oil, you can keep the oil apart for later use. Combine the drained tuna, onion, olives and zucchini in a mixing bowl. Add the sour cream, salt, pepper and dried basil and mix well. If the mixture is too dry, add more sour cream or a little bit of olive oil.

In a shallow oven dish, place the mini pepper halves and fill each of them with the tuna mixture. Sprinkle some olive oil over each pepper boat. Roast for 20 minutes in a preheated oven on 200°C or 392°F. Before serving, add some freshly ground black pepper and some fresh basil leaves and serve warm.

How to serve roasted mini peppers

These tuna stuffed mini peppers are perfect to be served as finger food at a dinner party. With the stem still attached they are firm enough to hold by hand before eating. They look really colourful, taste delicious and are so fast to make. You can even make them in advance and pop them in the oven just before you are ready to serve them. These stuffed peppers with tuna can be served as an appetizer platter together with a creamy baba ganoush, cold Spanish gazpacho or even delicous oven baked nachos.

They also make a good starter for a family meal. Because only sour cream has been added they are light and don’t fill you up too much. Count 5 halves per person as a starter.

They also do very well as a light meal or snack in between meals. When eating them as a light lunch, serve 5 halves per person and add some couscous or rice salad to the side.

Mini peppers are similar to larger bell peppers, but they are richer in flavour, have less seeds and are sweeter in taste. They are the perfect size for snack food. They can be eaten either raw, roasted or grilled.

Do you have to precook the peppers before stuffing?

Mini bell peppers are slightly softer than larger bell peppers so there is no need to cook or roast them before stuffing. They are also very nice to eat raw, so even if they are not completely roasted they will still taste nice. 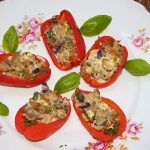