Spanish chorizo sausage in apple cider or ‘chorizo a la sidra’ is a classic Spanish tapas recipe. This smoky, meaty pork sausage braised in fresh, natural apple cider is a perfect flavour combination. This tapas dish originates from Asturias, where the cider is produced, but it can be found all over Spain as a savoury appetizer.

This authentic Spanish tapas dish is characterised by its simplicity as it only needs two key ingredients. As there is no hiding amongst a plethora of other flavours, the 2 flavours need to be perfect, so make sure to only use good quality products to make this dish.

What is Asturian cider?

What makes Asturian cider or Spanish cider so different you may ask yourself?

While no one knows exactly who invented apple cider, it is a very traditional drink from Asturias and plays an important part in the local culture. Asturias is a lush and green Comunidad Autonoma (or autonomous community) located in the north-western part of Spain. The area is dotted with apple orchards for producing the only ingredient of the local apple cider. Asturias is famous for their natural cider, or ‘sidra natural’, which means that the drink is fermented without any extra additives, ie: no extra sugar and no yeast. What might also surprise you is that this cider is not sparkling.

It is low in alcohol (4-6%), but is strong in flavour and has quite some acidity. Apart from being delicious and refreshing to drink, this is also usually the cider that is used to make ‘chorizo a la sidra’.

If you cannot find natural apple cider or would like to try another version of this delicious Asturian recipe, you can make this chorizo in red wine or chorizo al vino tinto. It adds another dimension of flavour to this classic Spanish starter. It is different in flavour, but it’s as delicious as the more popular chorizo in apple cider.

The simplicity of this dish lays in the number of ingredients. You only need 3! But, it is the quality of these ingredients that will make this dish work.

How to make it

With a sharp knife, make a few cuts in the sausage so it can release some of its juices while braising, but not too many, otherwise the sausage will dry out.

Use a deep, medium-sized skillet or cooking pot. Place the sausages inside and add the apple cider and bay leaves. Bring to a boil and leave to simmer on low to medium heat for 15 to 20 minutes. The chorizo sausages must be braised slowly so they can absorb the maximum amount of flavour from the apple cider. At the same time, the juices of the sausages will mix slowly with the reduced apple cider combining it all into a delicious sauce.

How to serve chorizo a la sidra

When the chorizo is ready, slice the sausages into 1 inch or 2 cm thick pieces and serve them in a clay dish together with the cooking liquid. Serve with slices of french loaf, baguette or rustic farmers bread to mop up all the delicious juices in the serving dish.

Chorizo in cider is served as a Spanish tapa, or starter dish, either as part of a whole tapas meal or as an appetizer. It will also do very well as finger food at a dinner party or summer BBQ.

Serve with a glass of Spanish cider, red or white wine.

Can I use sparkling cider?

This tapas dish is traditionally made with natural, non-sparkling cider, without any additives. I have however made it before with sparkling cider, it’s just not completely the same in flavour though. In that case, bring the cider to the boil and leave to boil for about 10 minutes and only then add the chorizo sausage and follow the rest of the instructions as mentioned in the recipe card.

Can I use any sparkling cider?

No, you should not. Try to stick with natural ciders without added sugars. Try to use a fermented natural dry cider. When using a commercial cider, it often contains extra sugars which will alter the result and taste of this dish.

Can this dish be made in advance?

Yes, it can. Just follow the recipe. After slicing the sausages, put them back in the cooking liquid. Allow to cool and store in the fridge until just before serving. Warm on the stove on low heat, just enough to heat up the ingredients before serving. 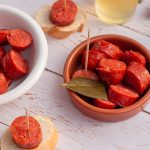