Padron peppers, or pimientos de Padrón generally have a mild and sweet taste, although some can have a nice spicy kick. Grilled with olive oil and sprinkled with flaky sea salt, these green delicacies are a classic Spanish tapas dish.

What are Padrón peppers?

These small peppers originate from the Spanish municipality of Padrón in the autonomous community of Galicia, located in northwestern Spain, hence their name. Canonical in shape and ranging between 2 to 4 inches (or 5 to 10 cm) in length, they mostly come in a bright green colour. They are served grilled in olive oil which brings out their typical mild and sweet taste. But don’t let yourself get fooled since one out of 10 Padrón peppers are really hot and spicy. The fun part is that you cannot see or know which ones are spicy until you eat them. It’s a bit like playing Russian roulette, but with ‘harmless’ chilli peppers.

Some are hot and some are not

In Spain, Padrón peppers or pementos de Padrón in Galician are typically eaten as a Spanish tapas dish. Make sure to have a plate of bread ready for when you choose the spicy one, because it will burn your tongue. Generally, when serving a plate of these green delicacies the Spanish have a saying, ‘unos pican otros no’ or some are hot and some are not. I must say, it doesn’t happen that often that you end up with a very spicy one on your plate, so don’t worry if you don’t like it hot, the chances are slim you will get one. And if/when you do, eating a slice of bread, or taking a swig of milk will do wonders.

How to cook Padron peppers

Cooking Padrón peppers the Spanish way is so easy and simple. For preparing this traditional Padrón peppers recipe, just heat some olive oil in a cast iron skillet or frying pan and add the washed peppers. Make sure all the peppers can touch the oil and the pan, so only one layer. If you only have a small pan, consider making 2 separate batches. Just fry the peppers for a few minutes, stirring regularly until the skin is blistered and they turn soft. Serve on a large plate to share and coat with a pinch of flaky sea salt. That’s it.

Pimientos de Padrón are perfect camping food since they are very fast to prepare, are full with vitamins and are great as a vegetarian appetizer or side dish.

Why are Padrón peppers spicy?

Many people wonder why some Padron peppers are hot and some are not. Well, it depends on the amount of sunshine and water they receive during their growth that defines the level of spiciness. In general, these peppers find themselves on the very mild end of the pepper scale and the odd one on the almost opposite end. That is what makes them so fun to eat, especially in a group, to watch who will be the ‘lucky’ one.

Can you eat the seeds?

Can you eat Padrón peppers raw?

You could eat these peppers raw, but it’s not common in Spain to do so. With that said, if you want to get the best flavour out of these peppers I advise to just grill or blister them in a bit of olive oil.

What is the best substitute for Padron peppers?

If Padrón peppers are difficult to find, you can substitute them with Shishito peppers, which is an East Asian pepper variety. They have a slightly sweeter taste than the Spanish counterpart. They are generally mild but equal to the Padrón pepper, on average, one out of 10 is spicy. So beware.

How to serve Pimientos de Padrón

Padrón peppers are usually served as a Spanish tapas dish, preferably with some slices of French loaf or baguette. They are great to serve as an appetizer with a glass of wine or even as a side dish with some grilled meat like these chicken skewers.

When serving these peppers as part of a tapas meal, consider serving with Spanish gazpacho or Chorizo bites. Also try these delicious feta stuffed Padrón peppers recipe as an interesting twist to this classic Spanish tapas dish. 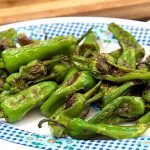