Fennel together with zucchini and star anise combines into a creamy and silky soup with a delicate anise-like aroma full with nutrients and fibres.

Fennel is a vegetable that is often used raw in salads, roasted, or grilled to eat as a side dish. It’s also a vegetable that works perfectly in soups, either combined with other ingredients or with fennel as the mayor component. What I like about fennel in a soup with just one or two accompanying ingredients is that the soup comes out silky smooth with this off-white colour, which just invites you to dig in.

What part of the fennel do you use for soup?

You don’t have to throw away the green part of the fennel. If you like the stronger anise-like flavour, you can always use it in a salad, when making a vegetable stock or use it to make this: Oven roasted fennel with carrots. You can also keep the green fennel fronds for decoration when serving the soup and for additional flavour.

Star anise is a star shaped pod with a sweet anise-like flavour. Besides that, it is one of the most pretty looking spices and has a wonderful and delicate aroma. The taste of star anise is very similar to fennel so they work really well together in cooking. When adding a star anise while cooking the fennel soup, it will mildly enhance the flavour of the soup.

How to make fennel soup with zucchini and star anise

Although this is a recipe for fennel soup, I have added some zucchini to thicken the soup. I normally always add a bit of zucchini or potatoes when I make soup as a thickener. I don’t like to add cornstarch, flower or other thickeners because for me it changes the taste of the soup. I normally add the zucchini with the green peel, but in this case it would change the colour of the soup too much to some brownish colour, so I peeled the zucchini first.

It’s important to cut the fennel bulb into small pieces and cut across the long part. Since fennel can be quite stringy, you might still be left with some strings in the soup after mixing if it hasn’t been cut small enough. That is just my experience to get a more silky soup.

Do not use too much onion, otherwise the onion will overpower the delicate taste of the fennel. When frying the onion, zucchini and the fennel, make sure they don’t brown but are just translucent, otherwise the soup will end up with a brown colour instead of a nice whitish one.

Add cream after mixing the soup to get it more creamy, silky and white coloured. I have used full cream, but you can also use milk or light cream for a less heavy soup. 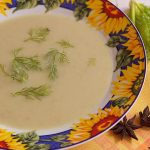