Fresh Spanish gazpacho is a chilled vegetable soup bursting with Mediterranean flavours and is perfect on a hot summers day as an appetizer or light meal. It is also very fast and easy to prepare. Serve this cold Spanish soup with some gazpacho toppings like finely cut tomato, cucumber and onion and you have a refreshing dish.

Ever since I lived in Spain, Spanish gazpacho has been my favourite soup during summer time. I used to eat it all the time as an appetizer or first course when having lunch out. I even always had some stored in the fridge at home, both homemade and bought from the store. After coming back home from work it’s so fast, refreshing and delicious.

Gazpacho is also one of those authentic dishes where each family has their own traditional family recipe. So ask various Spaniards about their homemade gazpacho recipe and you will get plenty variations. Most of them will have main ingredients for a gazpacho, like tomatoes, olive oil and cucumber, but all the rest may vary.

If cold soups are your thing, have a look at this Spanish cold tomato soup recipe, called salmorejo. It is as delicious as this traditional gazpacho recipe.

Authentic gazpacho is prepared with raw ingredients so make sure you only use ripe vegetables that are in season. It will make the taste of the soup so much better. All the exact quantities of the ingredients can be found in the recipe card at the bottom of this post.

Tomatoes: Tomatoes are the core ingredient of a good traditional gazpacho, so it’s important to use ripe tomatoes with a deep flavour. The best tomatoes to make a gazpacho with are Roma tomatoes, or plum tomatoes as they’re also called. They are bursting with balanced flavours, not too sweet nor too acidic, just make sure they are nice and ripe. Use ones that have been out of the fridge for a couple of days where they will have been able to continue to ripen. Other tomatoes you can use are tomatoes on the vine. Make sure to core the tomatoes before blending, you can leave the peel.

Olive oil: Like most dishes in Spain, olive oil plays an important part in gazpacho. Make sure to use a good quality Extra Virgin olive oil. Since olive oils differ in flavour, I would say to use the one with the flavour you prefer the most.

Garlic: Garlic is blended into the soup to give the dish a more tangy flavour. I recommend adding half a clove of garlic, but taste it after blending and add more if necessary. Raw garlic can be overpowering, so rather add more afterwards than too much to start off. But remember, Spanish people love garlic and so traditional gazpacho tends to have a nice pungent taste.

Cucumbers: I use an English cucumber in my gazpacho recipe. They are nice and juicy and mild in flavour. I don’t peel the cucumber.

Onion: Use a small, peeled onion, or you can cut half off if the onion is a big one.

Peppers: A traditional Andalusian gazpacho usually includes a green Italian pepper, the long ones, not the bell pepper. I cannot always source these green peppers, so I tend to use the red bell pepper for this cold vegetable soup recipe. The red bell pepper adds some sweetness to the soup. I use the pepper without the seeds but with the peels.

Bread: A slice of white bread is added to the vegetables to thicken the soup. To make a gluten free version, leave the bread out of the recipe. It doesn’t really matter if the soup is less thick.

Vinegar: Vinegar is added to lift up the freshness of the dish. Use a good quality vinegar, not a normal white vinegar. Any good sherry, white wine or red wine vinegar will be fine.

Spices: I use, besides salt and pepper, a very small pinch of ground cumin and paprika powder. It might not be according to the traditional gazpacho recipe, but I think it adds a nice flavour to the recipe I use.

How to make gazpacho soup

Take a bowl with water and let the bread soak in it for a few minutes. The bread needs to be nice and soft before adding it to the blender.

Wash all the vegetables properly since you will also use the peel for most of them. You need to core the tomatoes but you don’t have to peel them. Before cutting the vegetables, keep one quarter aside for the garnish.

Chop the cucumber, tomatoes and pepper roughly and put them in the blender. Peel the onion, chop and add it in the blender. Peel the garlic, cut in two and add one part in the blender. Add the olive oil, vinegar and bread (first squeeze out the water with your hands) with a pinch of salt and pepper. Start blending properly for a smooth mixture. Taste and add the cumin and paprika. Add more salt, pepper and garlic to taste. If the mixture is too thick, add a bit of water. If not thick enough, add a bit more bread.

Put in the fridge and let it chill for at least 2 hours. Remember to taste before serving and add more seasoning if needed. Just before serving, take the vegetables that you set aside and finely dice them. Serve them in separate small bowls so everyone can add what they like to the soup.

How to serve gazpacho soup

Gazpacho is normally served in a small bowl or whiskey tumbler. You can eat or drink it straight up or you can add toppings, which is how the soup is served in Spain. Normally toppings includ finely diced tomatoes, cucumber, peppers and onions.

as an appetizer: Gazpacho can be served as an appetizer or as a starter before a main meal. Serve the soup in a small glass or little bowl. The advantage of serving this cold soup as an appetizer at a dinner party is that it can be prepared in advance. Just take it out of the fridge, ready to serve. When gazpacho is served in a glass or small bowl, don’t add too much garnish, it will be difficult to drink.

as a light meal: When serving gazpacho as a main meal, serve the soup in a larger bowl with lots of garnish to the side. Aside from the finely diced vegetables, you can also serve it with homemade croutons, Spanish cured ham or diced hard boiled egg.

Should you peel the tomatoes to make gazpacho?

No, you don’t have to peel tomatoes for preparing a tomato gazpacho soup. If you use a food processor, blender or good hand mixer, the peels will be completely blended in and you won’t notice them anymore. On top of it all, eating tomato peels is good and healthy for you since they contain a lot of carotenoids.

How to store gazpacho soup?

Store the gazpacho in a closed container or closed bottle in the fridge.

How long does gazpacho keep in the fridge?

I would not keep gazpacho for longer than 3 days in the fridge. After that, the taste won’t be nice and fresh anymore. If you have made a large batch I would just freeze part of it and eat the rest in 2-3 days. But in all honesty, gazpacho never lasts longer than 2 days in my fridge. It’s just too delicious not to keep eating or drinking it.

Should gazpacho be served cold?

Yes. Gazpacho is traditionally eaten during summer time in Spain as a cool and refreshing starter. It’s made with raw vegetables, so it’s definitely better served cold. The soup can of course be heated but the flavours won’t be nice. Since the soup is made with vinegar, olive oil and raw ingredients, including raw garlic, the taste would be rather dull if heated. 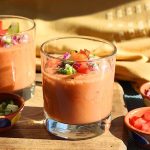