Dogfish with fennel, red bell peppers and tomatoes combined into a delicious stew. The addition of olives, oregano and basil will give it a definite Mediterranean twist.

I love to experiment with new ingredients, so when I found fresh dogfish at my local fish monger I decided to give it a go. The result was a delicious Mediterranean flavoured fish stew with lots of veggies. I learned that dogfish, with its beautiful sweet flavour, is a very easy fish to prepare a flavourful meal with. Dogfish, also known as scyliorhinus canicula, is a small-spotted catshark or lesser-spotted dogfish and has no bones but only a skeleton of cartilage which makes it easy to cook and eat. The skin of the dogfish is very difficult to remove, which is why it is normally sold skinned. The dogfish has the appearance of an eel, but it in fact belongs to the shark species.

How to make Mediterranean stewed dogfish

Cut the dogfish in 7 cm whole chunks (or 2 3/4 inches). The fish does not have any bones but instead has a cartilage skeleton which is very easy to cut through. Season the fish fillets with salt and pepper. Add olive oil into a frying pan and cook the fish on high heat for 2 minutes on each side. Remove the fish from the pan and set aside.

In the same frying pan (after removing the half cooked fish) add a tablespoon of olive oil and fry the minced garlic, onion, fennel and pepper slices for 10 minutes on medium heat. While the veggies are frying, add the dried oregano and basil, season with salt and pepper to taste then add the white wine vinegar. After 10 minutes of frying, add some water and place the fish pieces, cocktail tomatoes, olives and rosemary sprig on top of the veggies. Let everything simmer on low heat for 15 minutes so the fish is now completely cooked.

How to serve dogfish with fennel, peppers and tomatoes

The dogfish should be served right after cooking to prevent the fish from overcooking while sitting too long in the warm stew. Garnish with fresh dill and fennel greens on top.

This dogfish stew can be served with various side dishes. It goes really well with rice, mashed potatoes or these grilled rosemary potatoes. 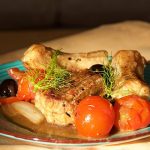