This creamy tuna pasta recipe with leek is a healthy, easy and comforting pasta dish. The combination of savoury tuna, sweet leeks and a creamy zesty sauce topped with parmesan shavings makes this dish fresh, light and great for a light and quick lunch or an easy weeknight dinner option.

Leeks are a wonderful ingredient to flavour up many dishes. Mostly used in stews and soup, leek works really well in dishes like quiche or pasta or just as a side dish with a cheese or butter sauce. Leeks are part of the onion and scallion family but more subtle in flavour with a mildly sweet taste after braising.

For this recipe I have used canned tuna which goes really well with both pasta and leek. Keep in mind that all the cooking times and the method described in this recipe is for the canned version and will be completely different when using fresh tuna.

How to clean leeks

Leeks need to be washed thoroughly before using since a lot of dirt and grit gets stuck in between the thick green layers. A quick rinse under cold streaming water will not do the job, so follow these easy steps:

How to make leek and tuna pasta

How to serve this dish?

Just before serving, garnish with some parmesan shavings and chopped fresh parsley or basil. It can be served as a lunch dish or as a quick and easy weeknight dinner meal. Serve this creamy tuna pasta with leek and lemon together with a fresh garden salad topped with a tangy honey mustard dressing. Or consider serving some delicious oven-roasted garlic bread on the side. 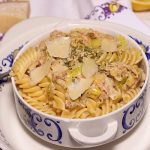