The distinctive sweet and bitter flavour of the braised Belgian endives combined with the cheese and salty bacon makes this under 30 minutes recipe an amazing and easy everyday meal.

What are Belgian endives?

Belgian endives, also locally known as ‘chicons’ in French, and ‘witloof’ or ‘witlof’ in Dutch are small white cylindrical shaped vegetables with a yellowish head. Although Belgian endives can be purchased all year round, the best quality can be found in Winter season, from December to April. During these Winter months they can surely be considered a staple diet for many Belgians.

Having high nutritional value, low sodium and high mineral content, it’s a very versatile vegetable that can be used in multiple ways. Belgian endives can be eaten raw in a salad, like this Belgian endive salad with apple and ham, braised or grilled, the leaves can be used as edible cups for appetizers and it makes a delicious soup.

How to prepare Belgian endives with bacon and cheese

This recipe is a quick and easy take on one of the national dishes of Belgium; ‘chicons au gratin’ or ‘Belgian endive wrapped in slices of ham with a bechamel sauce and cheese’, but I have decided to use bacon bits instead of ham, just to give a different and more salty flavour to the dish. Feel free to choose between the 2.

What goes well with Belgian endive?

This recipe can perfectly be eaten as a light meal with some slices of baguette or toast. Mashed potatoes also pairs really well to eat with the creamy cheese sauce. Or even just normal boiled potatoes can be eaten as a side dish. 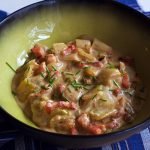