Braaibroodjies are the South African version of grilled cheese sandwiches. These golden brown sandwiches with gooey melted cheese, sliced tomato and onions are a traditional side dish for any South African barbecue, or braai.

This barbecue grilled sandwich can be made with either white or brown bread, however, traditionally white bread is used. The rest of the ingredients are simple; cheese, tomato and onion. Use a nice melting cheese, like cheddar or Emmental to make the inside gooey and creamy when you bite in to it.

There is one thing that makes a South African braaibroodjie so different for me and that is the addition of some fruit chutney or apricot jam spread on the inside of the bread to give it a nice hint of sweetness. In South Africa, most people will use the brand ‘Mrs. Balls Chutney’, which is made from dried peaches and apricots, but it’s not always easy to find elsewhere. As an alternative, you can use apricot jam, which is what I have done in Europe and it tastes just as good.

How to make grilled cheese and tomato sandwiches

Take the slices of bread, butter one side and flip them over with the buttered side downward. Spread the apricot jam on the other side of the slices. Take the tomato and onion and thinly slice them in rings. Layer half of the bread slices with the tomato and onion rings then cover with the grated cheese. Season with salt and pepper and put the other half of bread on top of it with the buttered side on the outside.

Now they are ready to place on the grill. When having a barbeque with charcoal, cook the sandwiches last on the grill when the coals aren’t too hot any more or they will be cremated. If using a gas grill, turn it down to its lowest possible temperature setting. You can either place the sandwiches straight on the grill or put them in a closed hinged grid which makes them easier to handle. In order not to burn the sandwiches they need to be turned regularly so both sides are nice and toasted but not burnt to a black crisp. Otherwise use 2 wide metal spatulas to get a better grip on the sandwiches so they don’t break apart. You don’t want to have to dig for your tomatoes and melted cheese fillings in the coals. Grill the braaibroodjies until each side is golden brown and the cheese is melted and creamy.

How to serve South African braaibroodjies?

Braaibroodjies or grilled tomato and cheese sandwiches are usually served as a side dish with a South African braai or barbecue. Since it’s a side dish, count on one cheese sandwich per person. Serve it alongside the grilled meat or fish and together with some other barbecue side dishes, salads and dips like: 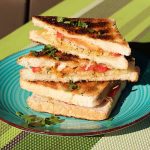